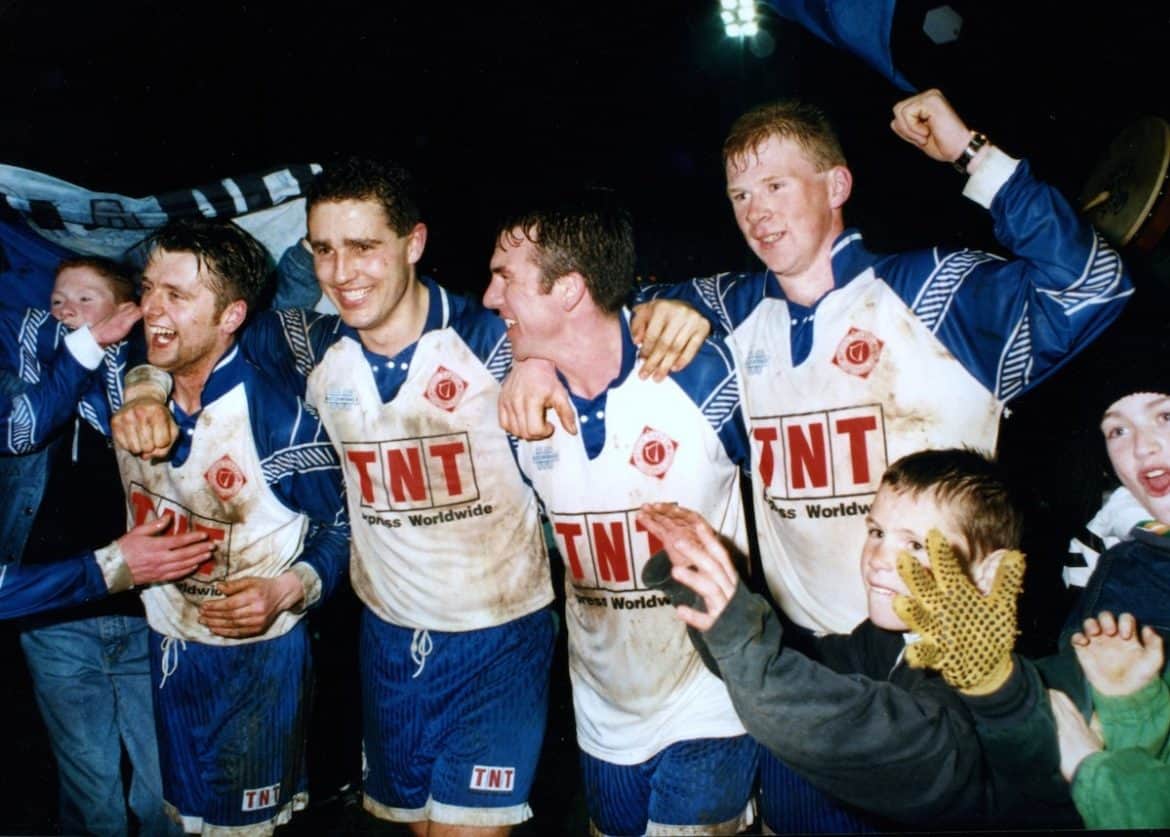 IT WAS A SEASON like no other at Finn Harps.

Twenty-five years ago today, on April 20th 1996, Harps defeated Waterford United 3-0 in Ballybofey to confirm their return to the Premier Division of the League of Ireland.

Back-to-back defeats in the play-offs in 1994 and 1995 by Cobh Ramblers and Athlone Town saw Harps go close and the feeling was that they weren’t far off.

The 1995/96 season began with Geoff Carr’s TNT Express agreeing a lucrative sponsorship deal, reported at the time to have been worth £30,000 – but the sponsor made it clear that he wanted a return on the investment.

At the AGM, Carr said: “My message to the management and players is one of total support to reach the aims of Premiership football.”

It began so well, too. Jonathan Speak was bought from Ballymena United for a club record £14,000 – and the Sion Mills man netted 22 goals in all competitions in his first season.

A hat-trick in a 5-2 win over Longford Town at Strokestown Road came in a run of Harps winning their opening four games.

Harps then went six without a win, and a 3-1 loss to Omagh Town in the Irish News Cup was the last straw for the committee.

The following night, they voted to sack Patsy McGowan as the manager.

At St Julian’s Road, McGowan became embroiled in a touchline spat with Martin McGinley, who he had substituted during the second half.

“I feel like I am Jesus Christ who has just invited Judas to the Last Supper,” blasted McGowan in the local media

Paul Hegarty would never play for the club again.

Through Hegarty, the captain, Harps players issued a statement calling for McGowan’s reinstatement, but Hegarty subsequently signed for Derry City and – after Charlie McGeever had been player-manager for over two months – Harps appointed Dermot Keely on February 28. 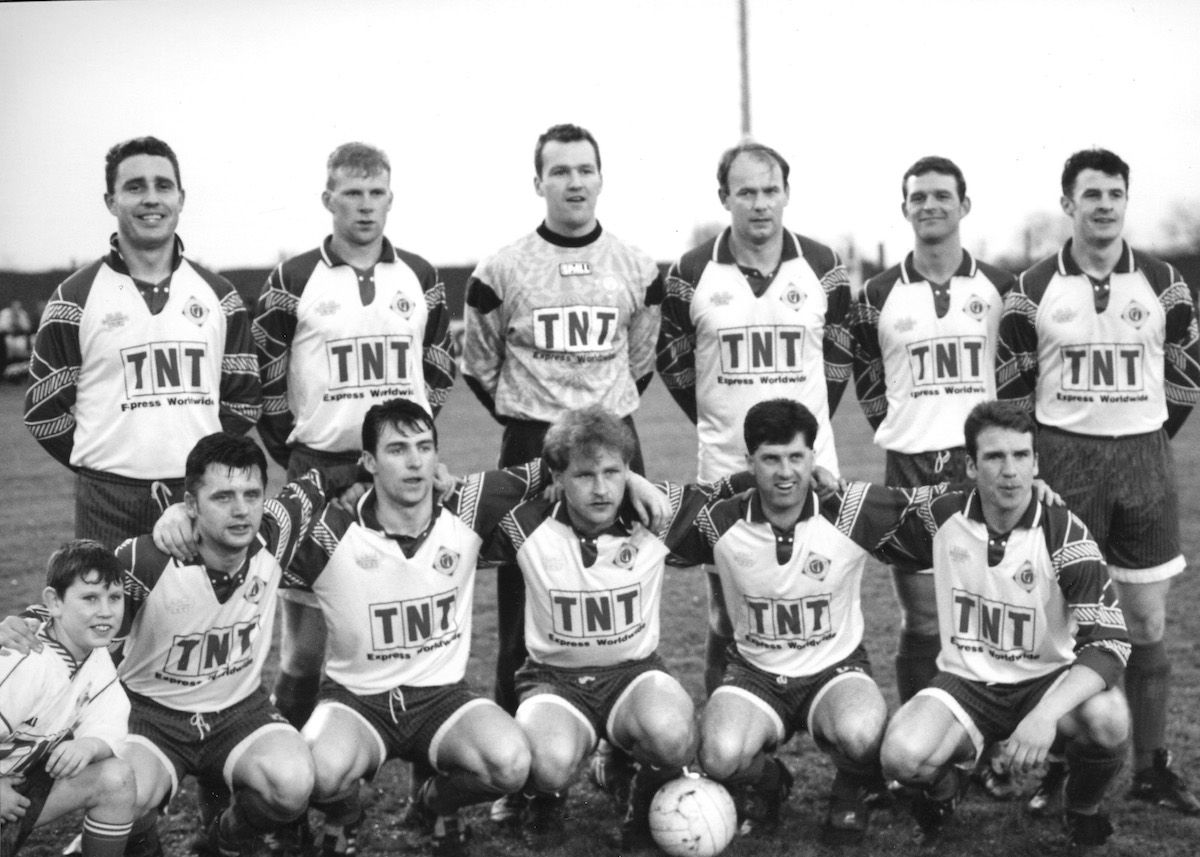 Former Scottish international Ian Wallace was interviewed and was favourite for the job, but Keely was taken in for the last two months of the season.

A 7-0 win over Monaghan United and a 1-0 win over Longford Town began his tenure in style – but when Harps lost 4-0 to Cobh Ramblers at the end of March, automatic promotion looked beyond them.

A play-off, for what would have been a third season in a row, beckoned.

However, Cobh lost twice and, when Speak netted twice in a 2-0 away win over champions Bray Wanderers, Harps seized their chance.

A crowd of 3,500 turned up to Finn Park on the night of April 20, 1996, as Harps took on Waterford United knowing that victory would clinch that coveted spot back in the top flight.

The nerves whistled through Ballybofey and were hardly lifted with the kick-off delayed by half-an-hour after the Waterford team bus broke down on the way to Finn Park.

The hero of a rain-sodden Saturday night by the Finn was perhaps a somewhat unlikely one: Right-back Maurice Toland was the two-goal hero of the famous 3-0 win.

On 29 minutes, John Quigg fed Speak with a throw-in to the edge of the box. Speak worked the chance and rolled the ball off to Toland, who shot sweetly to the top corner.

Just before half-time, Alan Doherty, a native of Ardee who’d signed for Harps at the start of that season, made it 2-0 and the promotion party was started.

“An amazing night,” Doherty remembered. “The group was packed and it was the best atmosphere I ever played in.

“The ball broke to Pierce Walsh and he squeezed a pass through to me…I hit it first time into the corner of the net. It was great running to the fans to celebrate it; they were all going crazy.”

“That night was one of my best nights in football,” Toland said.

“It was such an emotional night because it was, by and large, the same bunch of players who had been beaten in the play-offs the two seasons before that. We felt, going out into that game against Waterford, that we owed it to the supporters to get a win.”

McGettigan, from Milford, was a PE teacher at East Glendalough Secondary School in Wicklow. He took over as captain following Hegarty’s departure.

McGettigan had been an ever-present the previous season and missed only two games in 1995/96.

“I’ve waited for this for a long time,” he said that night in Ballybofey.

It was a strange sort of a feeling for Keely, who admitted that he’d inherited the squad late in the season.

“Making the Premier Division is great but we cannot lose the run of ourselves,” Keely mentioned.

“There is a hunger for success here and that is what we must build on. The potential is huge, but now there are so many structures which must be put in place and so many other areas which must be tapped.”

A nil-nil draw with Home Farm Everton the next week was the final time Keely would manage Harps as a summer dominated by takeover bids and boardroom upheaval soured what should have been a magical period.

Harps managed to survive in the Premier Division until May 2001 and this night 20 years ago remains one of the finest in Finn Harps’ history.