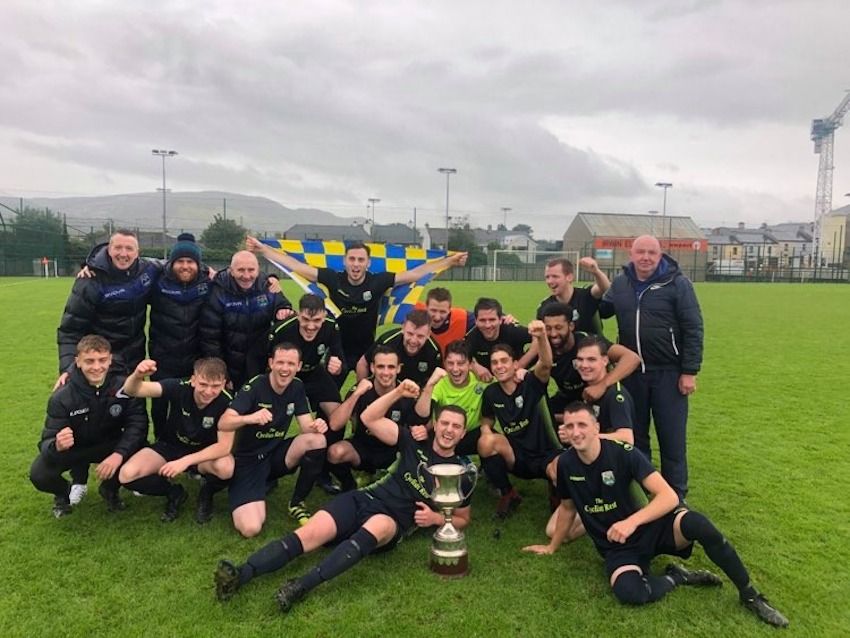 AILEACH clinched their third Buncrana Credit Union Cup at the expense of Clonmany Shamrocks in a second-half goal fest at Maginn Park.

By Chris McNulty at Maginn Park

The Premier Division champions added another piece of silverware on an afternoon when six goals were scored after the break – four of them to the winners.

Aaron Nash and Damien Duffy swapped goals in the first half, but second-half strikes by Gavin Doherty, Ethan Canning, Gareth McGlynn and Darren McMonagle, from a penalty, secured the prize for Emmet McLaughlin’s side.

Jason Devlin had briefly given Clonmany the lead early in the second half and when Mark McLaughlin tucked home with 15 minutes to play, Aileach were kept on their toes, but they’d done enough.

Government restrictions meant that the attendance was strictly limited to just a handful – and no more – of club and League officials.

A workman at the development of the new health centre next door paused momentarily for a glance through the fence and three spectators watched from a makeshift vantage point on a wall on Ferris Lane.  It was the latest unfortunate afternoon to highlight the ridiculousness of keeping supporters absent from sporting venues. This was cracking contest that deserved a live audience. 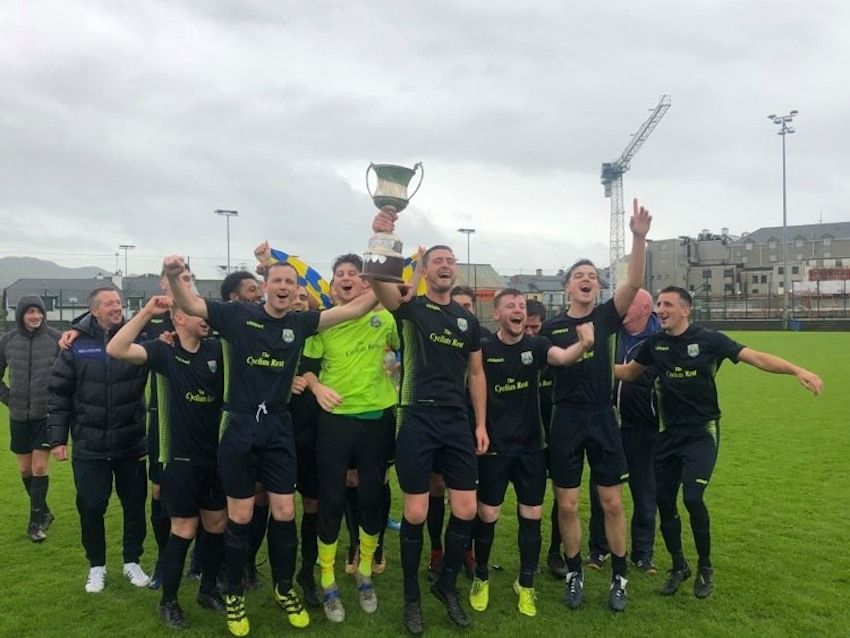 Nash’s goal, on 21 minutes, was cancelled out by Duffy two minutes before the break.

Jake Harkin swept the ball in for Duffy on the left-hand side of the penalty area. As he raced through, Duffy had the target eyed up and his finish past Kyle Dougal was superb.

Four minutes into the second half, Clonmany took the lead. Harkin pounced on slack defending and he squared for Devlin – the hat-trick hero in Clonmany’s Fr O’Gara Cup success last weekend – who crashed home.

The lead, however, was as short-lived as could be expected as Aileach levelled instantly. Gavin Doherty had work to do as he went to meet Canning’s delivery. Doherty’s magnificent header, from 15 yards, flew off the bar and past a stunned Paddy Harkin. The time between the goals was barely 60 seconds and outlined the wafer-thin margin that was between these sides.

Aileach restored the lead in the 57th minute as Canning, slipped through by veteran Gareth McGlynn, kept his cool to fire home. 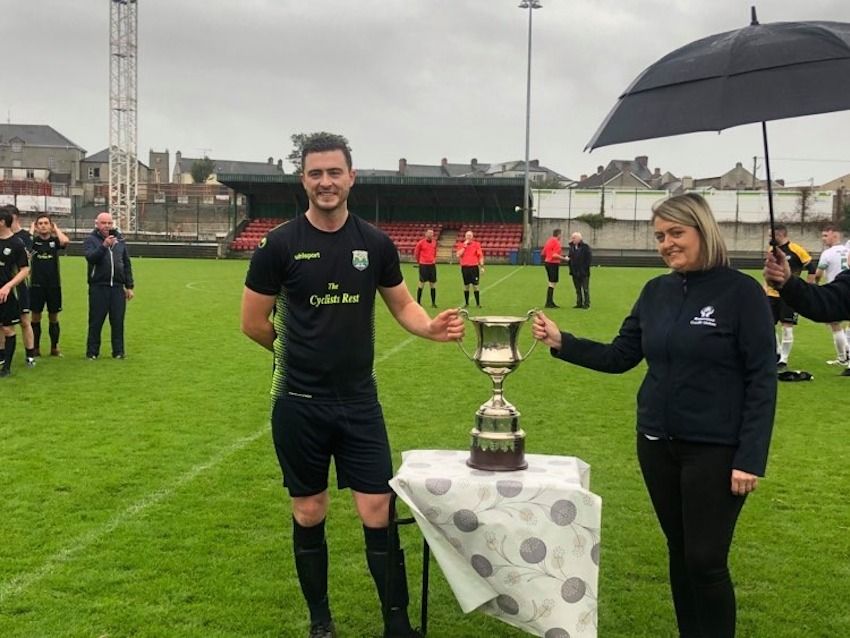 Nineteen minutes from the end, McGlynn came from deep to head home a fourth as Aileach added to their previous successes in this Cup in 2015/16 and 2017/18.

Gareth McGlynn had the previous touch, his ball across inviting the attempt by Nash, who had initially kept the play alive after a corner appeared to have been delivered too deep.

It was a body blow for Clonmany, who had been well in the tie until then, with Dougal, the Aileach ‘keeper, denying Jason Devlin with a smart save and the incoming Mark McLaughlin arrived just a fraction too late to turn home.

The Shamrocks have been riding on a wave lately, adding the Charlie O’Donnell and Fr O’Gara Cups to the Division One League title – with Premier Division football set to return to Shamrock Park in a couple of weeks’ time. Last weekend, Devlin’s first-half hat-trick set up a 4-0 win over QPS in the Fr O’Gara Cup final.

Earlier in the afternoon, Damien Duffy’s flick-on from a corner kick saw Gareth Bradley unable to convert at the far post.

Harkin saved well from Dermot Doherty in the ninth minute and it was Aileach who warmed after the opening goal.

Nash latched onto a delivery by the rampaging Darren Gallagher but, with Harkin beaten, his effort cannoned off the post, before Tommy McMonagle headed wide from Canning’s delicious corner.

A pulsating start to the second half yielding three goals in the opening 12 minutes.

Devlin riffled narrowly off-target on the hour as Clonmany looked for a way back into it while Nash was denied a fourth by a brilliant covering challenge by Clonmany defender Gareth Bradley.

Former Derry City ace McGlynn put the game beyond Clonmany’s reach, although Mark McLaughlin added a consolation when he steered home after good work by Devlin.